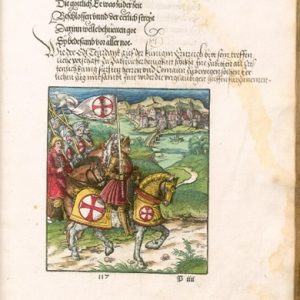 All are warmly invited to the 3rd Annual Leiden Austrian Studies Lecture, organized by the Foundation for Austrian Studies and Special Chair for Central European Studies in cooperation with the Institute for History.

This year’s lecture will be delivered by Prof. Howard Louthan, (University of Minnesota, Minneapolis, USA). It will be titled ‘Revisiting a Renaissance Classic: Theuerdank, Maximilian I (1486-1519) and the Discovery of the World’.

The Leiden Praetorius Ensemble will contribute with music by Heinrich Isaac (1450-1517). The lecture will be followed by a discussion with the audience. After the lecture you are cordially invited for a reception, also in the Faculty Club.

Please register by sending an e-mail to j.e.schep@umail.leidenuniv.nl.

For those of you who who cannot attend there will be the opportunity to join online: Prof Louthan will deliver his talk a second time for an international audience  on November 2, 2021, via Zoom, at 20:00 (Amsterdam time). For the online version you can sign up here.

Theuerdank, an epic poem produced at the court of Emperor Maximilian I in 1517 and illustrated with over hundred woodcuts, has been hailed by some as the greatest German book of the Renaissance. Part of a chivalric trilogy glorifying the life and career of the fascinating Habsburg emperor, Theuerdank tells the story of a knight (Maximilian) on a journey to win the hand of his lady (Mary of Burgundy). Scholars have traditionally examined this text as part of the emperor’s lifelong campaign to craft a heroic image of himself and eulogize his family and forebears. By focusing too closely on the propagandistic elements of the text, however, we lose sight of arguably Theuerdank’s larger significance.  In this lecture, we will turn our attention to some of these broader issues as we consider what the text and its marvelous woodcuts may tell us concerning a new understanding of politics, war, and the natural environment during the Renaissance.

Howard Louthan is director of the Center for Austrian Studies and professor of history at the University of Minnesota. He specializes in the intellectual and cultural history of early modern Central Europe with special attention to religion. His books include The Quest for Compromise, an examination of toleration in late-sixteenth century Vienna and Converting Bohemia, an exploration of the recatholization of the Czech lands in the seventeenth and eighteenth centuries. Along with Graeme Murdock (Trinity College Dublin) he recently published A Companion to the Reformation in Central Europe, which is the first full guide in English to the diverse Christian cultures of the Polish-Lithuanian Commonwealth, the Czech lands, Austria, and lands of the Hungarian kingdom between the fifteenth and eighteenth centuries. In the fall of 2021 he is a US-Polish Fulbright Fellow and member of the Polish Institute for Advanced Studies (PIASt). There he is working on a project examining the religious cultures of sixteenth-century Poland.