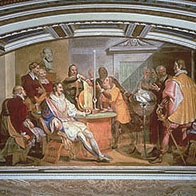 One of the most important developments in early modern science was the foundation of institutions for collaborative research and the publication of knowledge, such as the Accademia dei Lincei in Rome (1603), the Accademia del Cimento in Florence (1657), the Royal Society in London (1660), the Académie Royale des Sciences in Paris (1666), and the Scientific Academy of St Petersburg (1725). The communication of knowledge was integral to early modern processes of knowledge production in these new sites of collaborative science. Within these institutions, knowledge was not only acquired and disseminated orally and textually, but also visually. From drawings which circulated in society meetings to the printed plates in their published books, images across all media were vital to the developing practices of early modern science.

A growing body of scholarship has convincingly shown the importance of images and image-making practices to early modern knowledge production. Scholars have shown, for instance, that early modern botanists, zoologists, and physicians used drawings and prints as visual narratives to prove an argument or the existence of a species, as substitutes for the objects described, as mnemonic aids, or as tools themselves (Dackerman, Daston, Kusukawa). Research has also been done showing the important relationships between artists, natural philosophers and their collections (Baldriga, Egmond, Tongiorgi Tomasi). However, these studies have focused on single institutions or individual practitioners, and we still lack a comprehensive and comparative understanding of the relationships between visual culture and the developing practices of collaborative science.

Therefore, this project, Images and Institutions, seeks to fill that gap by bringing together an international team of historians of art and science for a three-day symposium in Rome to gain a larger picture of these relationships. Within these early institutions, images functioned in diverse ways: they communicated new ideas, recorded new phenomena, demonstrated new instruments, and stood in for missing specimens. They expressed theories, clarified arguments, organized concepts, and persuaded colleagues. Some images were created from nature or ad vivum, while others portrayed scientific ideas allegorically. In bringing together an interdisciplinary group of scholars, this symposium will reevaluate the functions of images and image-making practices that were integral to the advancement of early modern science within its formative institutions. The symposium contributes to widening disciplinary boundaries by bringing scholars from different fields into conversation and by having a wide geographical perspective.

We are interested in how images and image-making practices contributed to the collective and collaborative production and dissemination of knowledge in scientific institutions from the 16th until the 18th century. Central questions for this symposium include: What common visual practices were shared among these institutions, and importantly, where did they diverge? How did differing national artistic contexts impact the visual culture of scientific institutions? And how did these relationships shift over time with new enlightenment societies founded in the 18th century? By comparing these institutions, this symposium will explore the ways in which images and image-making practices were integral to the advancement of early modern collaborative science.

The symposium will consist of 30-minute papers, which will be the basis for a published edited volume. The symposium will take place on 14-16 September 2022 in Rome, and some travel and lodging assistance is available.

Scholars of art history, visual studies, and history of science and knowledge from all career phases are encouraged to apply. We welcome abstracts which explore visual strategies in early modern collaborative science, particularly in the context of Spain, Germany, Eastern Europe, as well as non-European regions.

Please send an abstract of max. 300 words, accompanied by a short/2-page CV to secretary@knir.it with the subject line: “Images and Institutions”. The deadline for abstracts is 20 May 2022 (extended). Applicants will be notified in early June.

This symposium is made possible with support from the Royal Netherlands Institute in Rome (KNIR), Bibliotheca Hertziana, Max Planck Institute for Art History in Rome, the Accademia dei Lincei (IT), the Association for Art History (UK), the Society for Renaissance Studies (UK), and The Huizinga Institute RNW History and Philosophy of Science (NL).