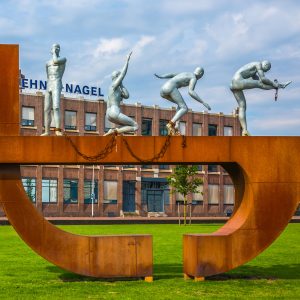 The Amsterdam School for Cultural Analysis (ASCA), Amsterdam School of Historical Studies (ASH), and Institute for Cultural Inquiry (ICON) are co-convening a two-day conference on the cultural imagination of slavery. The conference will be held on Thursday 28 and Friday 29 October 2021 at the universities of Amsterdam and Utrecht. The aims and motivations for the conference can be found below. We warmly invite contributions to this conference. If you are interested in participating, please send a title, an abstract of 250-300 words, and a short bio (under 100 words) to m.g.paijmans@uva.nl by 15 June 2021. We are currently approaching a publisher for the publication of an edited volume based on conference proceedings. If you would be interested to participate in this volume, please, indicate this in your response.

The conference offers an educational programme of 2 ECTs for student members of OSL, NICA and Huizinga Institute. The registration for this programme opens in September.

Slavery in the Cultural Imagination

Four hundred years of colonial history and involvement in slavery and indenture have left palpable traces in the emotions and imagination of the Dutch (Wekker 2016, Hoving 2012). Yet ‘Dutch exceptionalism’ and the ubiquitous myth of the Netherlands being a ‘colour blind’ country, has heavily glossed over these traces (Mathijsen 2019). The lack of awareness about the role of the Netherlands in slave trade and the anti-black and orientalist cultural production that accompanied it, stems from a complex merger of political, economic and cultural interests that prohibit the prospering of a critical understanding of Dutch racism and its history. This conference acts on the urgent need for knowledge of the Dutch colonial past and its current impact by bridging the compartmentalisation of the study of the Dutch colonial past (Stoler 1995; Snelders 2018). In doing so, it strives to move beyond ‘Dutch exceptionalism’, without ignoring the specific Dutch context.

We wish to facilitate an international, interdisciplinary exchange of both visual and textual narratives of the lives and afterlives of slavery and indenture. The scope of the conference encompasses the long historical period from the early modernity to the present-day. Therefore, we warmly invite both scholars working on the early-modern colonial period, scholars working in the domains of postcolonial and decolonial criticism, and all the intersections between these disciplines.

The conference involves Dutch colonialism and its world-wide heritage. This includes all research conducted in the entire ‘Neerlandophone’ space – i.e. the complex linguistic space spanning across former Dutch colonies (De Mull and Boehmer 2012). We warmly welcome research that focuses on written and oral sources in vernacular languages (such as, but not limited to, Sranantongo, Papiamento, Malay etc.), and we encourage proposals from a transnational, comparative perspective.

We especially wish to bring voices of dissent in (post)colonial discourse to the fore: marginalised voices, slavery narratives, (post)colonial interpretations of canonical literary texts touching on colonial history, and decolonial revolutionary poetry. We want to focus on narrativity, as we believe that attention to the layered and polyphonic qualities of narratives can reveal silent and disruptive voices in colonial discourse, as well as collective emotions and imaginations that have not been recorded in most historical sources. We are moreover interested in aesthetic, poetical and storytelling practices, including art, film, performance, philosophy, and other forms of knowledge production that were formed both in the metropolis and by enslaved and indentured peoples.