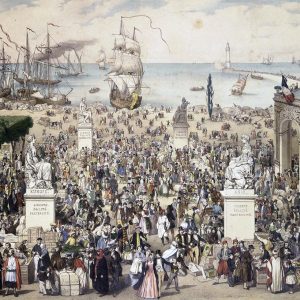 In the 1820s and 1830s, several waves of revolution went through the Atlantic world, culminating into the 1848 ‘springtime of the peoples’ in large parts of Europe and beyond. The same period saw large numbers of people moving beyond state boundaries: individual political activists and revolutionaries, but also migrant workers, seamen, soldiers, colonizers and colonized. Although many of these migrant movements can be associated with political uprisings, only few connections have been made between the study of migration history and history of political thought and practices. This one-day conference aims to open a conversation between these different strands of research. How did experiences of migration and cross-boundary mobility contribute to the formation of common revolutionary cultures in the period 1815-1848? To what extent did revolutionary cosmopolitanism survive into the first half of the 19th century? What forms of interplay existed between transnational migrations, cosmopolitanism, the rise of nationalism and imperial reform movements? These are the questions this conference intends to address.